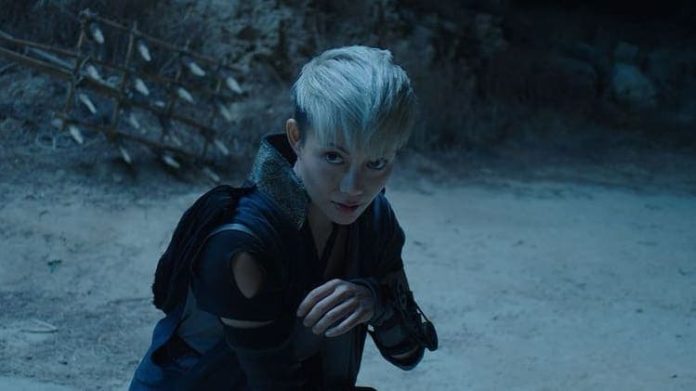 MAAC sits down with one of the baddest female action star today, JuJu Chan, to chat about her role in the sci-fi action thriller Jiu Jitsu.

MAAC: Hello JuJu! First and foremost we want to thank you for taking some time to chat with us today. Can you tell us a bit about your martial arts background?

JuJu Chan: I started with judo when I was 10 years old. From there I trained with various teachers from karate to different forms of kung fu (hung gar, wing chun, choy lee fut…). I also took up taekwondo when I returned to Hong Kong in 2010 where I later got selected into the Hong Kong ITF Taekwondo Team to compete in international competitions, both in forms and combat, where I won 2 bronzes and a gold for my team. After that I was recruited by a pro Muay Thai fight team and trained to fight for them, winning a championship belt the following year.

MAAC: Growing up, who inspired you to become an action star?

JuJu Chan: Growing up I never actually thought of being an action star. I was sent to learn martial arts as a kid because I was overly active, especially after watching Jackie Chan’s and Jet Li’s martial arts films with my dad. I kept training in martial arts for the rest of my life because I just loved it. When I became an actor it never occurred to me to use my martial arts skills to get roles, there simply weren’t any roles made available for actresses just because they knew martial arts, at that time. It wasn’t until my then mentor said I should combine my martial art skills with acting that I decided to try it. Best decision of my life!

MAAC: Being one of the few women in the industry today that can perform action at such a high level, you’ve definitely set a great example for young girls who dream about being an action star. What advice would you give to girls and women around the world who aspire to kick butt on-screen as well, if not better, than the boys can?

JuJu Chan: Don’t give up! There are a lot of naysayers and doubters out there. So many people were skeptical of my martial arts skills in the beginning. When eventually I got selected to compete for Hong Kong no one expected me to win anything. When I did they then just assumed that I won in forms (I won in combat too) and so can’t really fight. When I then won my Muay Thai fight in front of a crowd and on TV they said that I couldn’t act. When I casted for a Netflix role and won, I still faced some people criticizing me. It’s never ending, and it’s sometimes exhausting… but I won’t give up. So nor should any other girl who wants to do the same thing I’m doing.

MAAC: Speaking of strong women, what attracted you to the role of Carmen in Jiu Jitsu?

JuJu Chan: It really started with the impressive cast that the director, Dimitri, was able to assemble. I’ve always been in awe of Nicolas Cage so when I heard he was on board that was a big draw for me. Plus Tony Jaa, who I share the same agent with, and I was looking for projects to work together on, so Jiu Jitsu proved the perfect vehicle to do that on. And like you said, Carmen was a strong female character. Her skill in martial arts allowed me to stretch my wings and show off some of the things I can do through her. I had a lot of fun playing her.

MAAC: You along with Alain Moussi, Tony Jaa, Frank Grillo, Marrese Crump and Nicolas Cage definitely formed quite an impressive ensemble cast! What would you say was your favorite scene to shoot in the film?

JuJu Chan: Undoubtedly my favorite scene is of me fighting off a bunch soldiers followed by Tony joining in to fight another bunch himself, all filmed in one long take. These single long takes (oners) are very difficult to execute and really shows off the skills of the people both behind and in front of camera. I think we needed 5 takes before we got it right, which I think was pretty good.

MAAC: With your experience working in Hong Kong (Ex. Invincible Dragon), what is the biggest difference between filming a HK action film and a Hollywood production like Jiu Jitsu?

JuJu Chan: Comfort! Shooting Hong Kong films can take looooooong hours (I’ve been onset once for over 36 hours!). In Hong Kong films we also rarely have preproduction time to prepare for a fight scene. It’s all done on the spot, so it’s not only physically tiring, it’s also mentally very tiring as we must remember everything for camera within minutes of working it out. No question I get looked after a lot better on Hollywood films. Food is much MUCH better, we usually have weeks to a couple of months to prep for our fight scenes, I get more privacy and am just babied a lot more. In Hong Kong even stars like Chow Yut Fat can be seen sitting on a low stool eating dinner out of a take-out carton between takes. There’s a lot to be said about what unions have done for actors in the US.

MAAC: You’ve pretty much worked with some of the BEST martial arts stars in the business including Donnie Yen, Michelle Yeoh, Iko Uwais, Scott Adkins, Max Zhang, Mark Dacascos and now Tony Jaa on Jiu Jitsu. Is there anyone else on your wish list to collaborate with next?

JuJu Chan: That wish list is far too long and doesn’t just include action people. But if I were to name just some action people on the top of my mind it would be Dwayne Johnson, Wu Jing and some old schoolers like Jackie Chan, Jet Li, Arnold Schwarzenegger and Silvester Stallone.

MAAC: Any news regarding your return for another season of Wu Assassins with Iko Uwais?

MAAC: We also want to point out that we love your appearances in the action shorts Hit Girls (2013) and Hong Kong Shogun (2016) with Maria Tran! Is there any chance of another collaboration with Maria?

JuJu Chan: I love working with Maria. She did a fantastic job on the Roger Corman film we also worked together on, Fist of the Dragon. She’s a super hard worker and so creative. I hope one day Hit Girls becomes a full-on feature film and we can work on it together.

MAAC: Are there any other projects in the pipeline that you would like to share with us?

JuJu Chan: Right now I’m executive producing with my husband on a reality TV program I’m hosting called Fight’n Chance. It’s a martial arts based show, and we’ve already shot 3 episodes. Meanwhile there were a couple of films I was supposed to be on in 2020 that have been pushed back, so I’m hoping they’ll get back to production next year.

MAAC: Thanks again JuJu for your time! We definitely can’t wait for audiences to see you doing what you do best in Jiu Jitsu! We here at MAAC would like to wish you continued success and please stay safe in this crazy time!

Catch Jiu Jitsu in theaters, On Demand and Digital on November 20, 2020. Click HERE to view the action-packed Trailer!