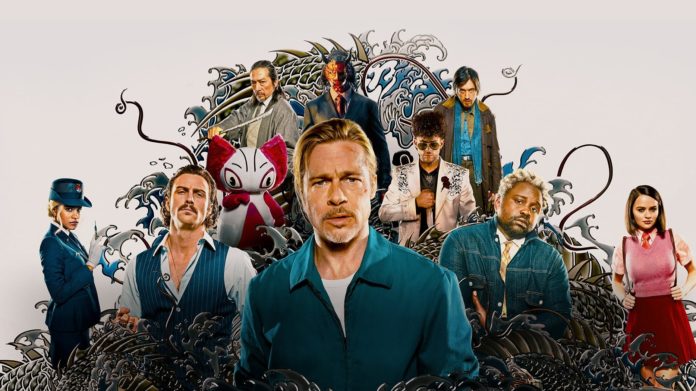 Of all the Hollywood actioners to be released this year, Bullet Train was certainly my most anticipated. Not only does it have a quality cast headlined by superstar Brad Pitt, it also marks the first feature from director David Leitch since Fast & Furious Presents: Hobbs & Shaw (2019). Unlike his previous film, Leitch hasn’t been restricted by a PG-13 rating, with Bullet Train fully embracing its R-rating with there being no shortage of bloody carnage on show.

Based on the novel by Kōtarō Isaka, Bullet Train concerns a group of assassins who all find themselves on board the same bullet train in Japan, with their separate missions all ending up to have something in common.

Ex assassin “Ladybug” (Brad Pitt) has been hired to retrieve a briefcase on board the train. This puts him up against “Tangerine” (Aaron Taylor-Johnson) and “Lemon” (Brian Tyree Henry), two assassin brothers who have been hired to not only retrieve the case but also rescue the son of legendary crime boss “The White Death”.

Thrown into the mix is schoolgirl “The Prince” (Joey King) who is manipulating Yakuza member Yuichi Kimura (Andrew Koji) into doing her bidding, with threats of killing his son. Outside the train there’s Kimura’s father “The Elder” (Hiroyuki Sanada) who has a history with “The White Death”. As the film progresses we learn more about these characters and what their true motivations are all the time as they race to their destination on the bullet train.

Having never read the novel, I can’t really comment on how good an adaptation of Bullet Train is. What I can comment on though is how much fun the film is, with the entire cast being on top form. Bullet Train is exactly the film I was expecting, with the majority of the 2 hour running time causing a massive grin to appear across my face, with me erupting with laughter on a number of occasions much to the chagrin of my fellow viewers.

Going by some other reviews, it would appear that I enjoyed Bullet Train more than others, but I find it hard to believe that action comedy fans wouldn’t be able to gauge any enjoyment from the film with it having a winning mixture of laughs and action.

Unsurprisingly David Leitch fills the film with a plethora of well executed action scenes, with a fine mixture of martial arts and gunplay throughout. While the body count isn’t on the scale of his earlier John Wick (2014), there is no shortage of bloodletting, although unlike John Wick, a lot of the violence is played for laughs, with the film being more in line with Leitch’s earlier Deadpool 2 (2018).

Like that film, Bullet Train is clearly a comedy but doesn’t go overboard and includes a number of dramatic scenes to humanize the characters. This is mostly done through flashbacks, which as well as giving us some needed backstory on the characters, helps break the film up by taking events out of the bullet train for a while.

While it is certainly more grounded than the super heroics of Deadpool 2, like that film, the world of Bullet Train isn’t exactly set in the real world with characters surviving events that would kill anyone in the real world. Of course, no one goes into action movies, especially one from Leitch, expecting realism. This only adds to the action, with each sequence becoming more violent and ridiculous than the last.

Originally Bullet Train was going to be handled by Antoine Fuqua, who was going to take a more serious approach to the material. Personally, I think they got the best man in Leitch, with the choice to make the film an action comedy being the best approach.

While some may compare the film to the works of Tarantino or Guy Ritchie, with its mixture of quality dialogue and violence, Leitch gives the film a strong Hong Kong action movie vibe with the fight choreography clearly inspired by the work of the likes of HK action choreographers Sammo Hung, Yuen Kwai etc.

One thing that did surprise me was that Bullet Train is much more of an ensemble than I thought it would be. Of course Brad Pitt is clearly the lead, but some of his fellow cast members get almost as much screen time as him, with some even managing to steal the focus away from Pitt. Well at least for a while.

Brad Pitt brings his easygoing charm to Ladybug, with him clearly relishing the chance to play an action hero that seems to be tailored towards his own personality. Although Pitt has starred in his fair share of action movies throughout his career, with such films as Troy (2004), Mr & Mrs Smith (2005) and Fury (2014) giving him a chance to be a badass, Ladybug is probably one of his most physical action roles to date.

When Pitt was initially announced as the lead I was imagining the type of character he would portray, thinking that he would be a cool hitman akin to John Wick. What I didn’t expect was that he would essentially be playing an Americanized Jackie Chan, with his fight scenes employing numerous props as weapons. On a number of occasions he even copies some of Chan’s trademarks which gave me a chuckle. Now, I’m not saying Pitt is on the same level as Chan, but Pitt does extremely well in his fight scenes, with him reportedly performing 95% of the action himself.

Standouts are his fight with “The Wolf” (Benito A. Martínez Ocasio a.k.a Bad Bunny) which is Pitt’s first action scene of the film, as well as his fight against Aaron Taylor Johnson’s “Tangerine” which is a finely choreographed bout that mixes laughs with brutality,

As great as Pitt is, the film is almost stolen from him by the double act of Brian Tyree Henry and Aaron Taylor-Johnson as the bickering assassin’s Lemon and Tangerine. Getting some of the film’s funniest dialogue, their relationship also manages to inject some pathos into proceedings which was unexpected. Lemon’s obsession with Thomas the Tank Engine certainly manages to make their scenes memorable, with his whole philosophy on life seemingly being based on the children’s story. This leads to some hilarious consequences.

As great as the rest of the supporting cast are, I was disappointed with all some are given to do. By now Andrew Koji should be known to most martial arts fans due to his role in television series Warrior (2019), where he gets numerous chances to show off his considerable martial arts skills. Unfortunately, he gets very little to do here, with him only taking part in a small amount of the action during the explosive finale. Even so, he does get a chance to show off his more dramatic skills, and at least he is in a film more worthy of his talents, unlike last year’s Snake Eyes: Gi Joe Origins (2021).

Like Koji, I was also surprised that Joey King doesn’t really get involved in the action considering how well she did recently in the period martial arts movie The Princess (2022). However, I wasn’t as disappointed as I was with Koji, as King isn’t primarily thought of as an action star. She still manages to make an impression with her character being one of the films most cold blooded, going to extreme lengths to complete her mission. It’s quite a change of role for King and the type she should do more of in the future.

With Koji and King getting shortchanged with the action, I was worried that martial arts movie legend Hiroyuki Sanada would share the same fate. Thankfully he gets a chance to show off his swordplay skills come the finale, with him cutting through a swarm of enemies in order to reach the films main villain, the White Death. Sanada adds a level of gravitas and style to his character, simply known as “The Elder.” He initially comes off as cold and detached, but he’s probably one of the film’s most honorable characters.

As well as the main cast, there are some surprises in store which I won’t spoil. Some of the film’s cameos actually had me cheering and just added to the overall fun on show. I would urge people not to look the film up and allow themselves to be surprised during the film.

Bullet Train may not be for everyone, but I found it to be terrific fun with Leitch keeping proceedings moving at such a quick pace that I didn’t even pay attention to the film’s shortcomings, which are minimal. Definitely Recommended.