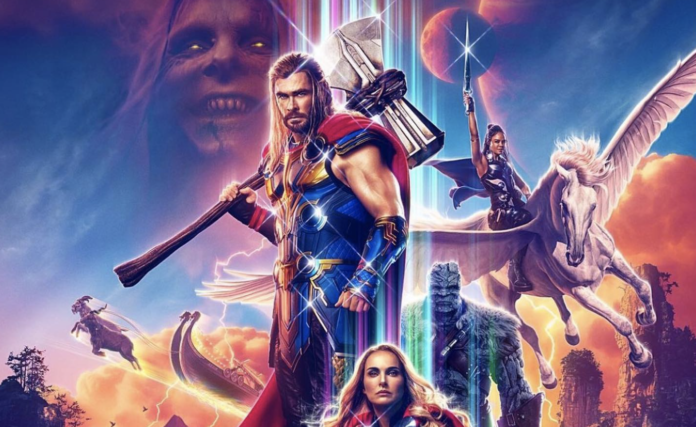 UPDATE: Have a look at the Official Trailer below!

Synopsis: Thor (Chris Hemsworth) goes on a journey unlike anything he’s ever faced – a quest for inner peace. But his retirement is interrupted by a galactic killer known as Gorr the God Butcher (Christian Bale), who seeks the extinction of the gods. To combat the threat, Thor enlists the help of King Valkyrie (Tessa Thompson), Korg (Taika Waititi) and ex-girlfriend Jane Foster (Natalie Portman), who – to Thor’s surprise – inexplicably wields his magical hammer, Mjolnir, as the Mighty Thor. Together, they embark upon a harrowing cosmic adventure to uncover the mystery of the God Butcher’s vengeance and stop him before it’s too late.

UPDATE: Russell Crowe (Man of Steel) has confirmed that he will be playing the Greek god Zeus in Thor: Love and Thunder. Crowe recently did an interview with the Australian radio station Joy 94.9, and the Twitter account @lovethundernews managed to capture a recording of the conversation.

For those unfamiliar with the character, he is an vindictive alien who only targets gods. Once a happy, humble family man, Gorr was forced to watch his family taken from him. Because his prayers for salvation went unanswered, Gorr decided that all gods are unworthy of the love and devotion they receive from their worshipers. To prove it, he’s devoted his long life to systematically ridding the universe of all gods. That includes Thor, the one god who once tussled with the God Butcher and lived to tell the tale.

UPDATE: Chris Pratt is confirmed to reprise his role as Star Lord in Thor: Love and Thunder.

UPDATE: Vin Diesel, who voices Groot in the MCU, just spilled the beans to Comicbook.com that some of The Guardians Of The Galaxy will be appearing in Thor: Love and Thunder. Diesel stated:

“I am waiting and excited for my friend James Gunn to knock this next one (GOTG Vol.3) out of the park. He took The Suicide Squad so he’s about to embark on it. Thor will also, the director talked to me about Thor will incorporate some of the Guardians of the Galaxy. That’ll be very interesting, nobody knows, maybe I shouldn’t have said anything.”

UPDATE: Oscar winner Chritian Bale (The Dark Knight trilogy) is officially on-board as the villain of Thor: Love and Thunder!

“Christian Bale is going to play our villain, which is going to be fantastic. I’ve read the script. I can’t tell you much. Lots of exciting text messages exchanged between Natalie and I. We’re going to have fun. Taika is writing [and] directing. Some familiar faces. Some new people coming into the mix.”

Bale’s character is being kept under wraps, so stay tuned!

UPDATE: Marvel Studios’ Kevin Feige was at the San Diego Comic Con to reveal details on the next Thor film, Thor: Love and Thunder, which will be the fourth feature film in the Thor franchise. It was revealed that Jane Foster, played by Natalie Portman, will become the Mighty Thor, the goddess of Thunder.

Director Taika Waititi, Chris Hemsworth, Tessa Thompson and Natalie Portman all came on stage for the presentation, eliciting a wild response from the Hall H audience who are looking forward to the film’s November 5, 2021 debut in theaters.

The God of Thunder will be back for Thor 4 with Taika Waititi (Thor: Ragnarok) confirmed to return to write and direct the film.

Waititi’s Thor: Ragnarok was a huge success mostly due to his tonal change to the franchise with his signature humor and wit, which played off perfectly with star Chris Hemsworth’s natural personality.

Marvel Studios is hoping Waititi can replicate this success as they move forward with the next installment. Hemsworth (Avengers: Endgame) is expected to reprise his role as Thor.